The Private Starship Green Comet is one of a fleet of PSS vessels that fly under the flag of the Trades Alliance, and in common with many of her sister ships, she tends to berth at Merkat Three Free Port in Galactic Zone Alpha. 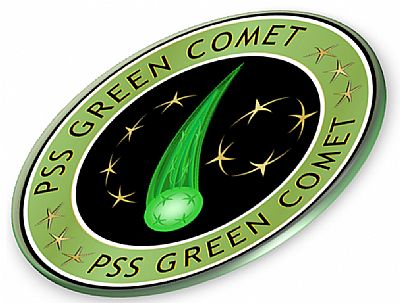 The Green Comet (PSS A119, NC-7X) is an independent trading vessel and she flies under the command of her owner, Captain Sarie Jikelleli; the first mate of the Comet is Commander Ace Periwinkle.

The Comet was badly damaged by what at first appeared to be raider fighters and made it into the Web at Merkat Three barely in one piece. The evidence she gleaned in her encounter suggested that the enemy ships were not typical raiders and were perhaps under the clandestine control of other agents. With suspicions falling on the Coalition of Systems Currently Under Treaty amongst others, and attacks on shipping lanes and targets other than PSS vessels increasing, things are hotting up...

Check out "The Pirates' Web: Arianrhod" by Sandi Cayless for the whole story!